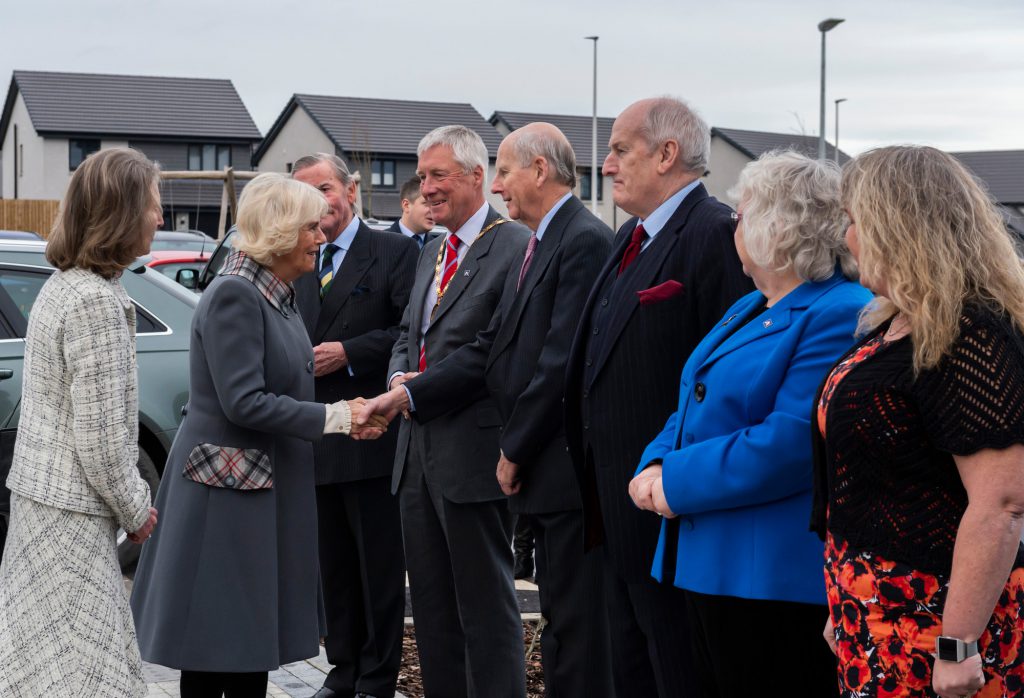 HRH The Duchess of Rothesay was in Banchory today to officially open Banchory Sports Village.

A plaque was unveiled by the Duchess following a tour of the facility, during which she took time to meet some of the groups who are already active users.

The doors to the £8.5 million facility opened to the community in August last year and today the formal opening was marked. Gathered guests included community fundraisers, councillors, former councillors, and partners in the projects. A number of the guests were presented to the Duchess during the tour and had the opportunity to share their own experiences.

As part of the event she visited a parent and child gym class, an older people’s badminton group, a cardiac rehabilitation session and watched pool users making the most of the facilities. On arrival she was meet by a large group of cheering pupils from two of the primary schools in the area.

She was met by Provost of Aberdeenshire Cllr Bill Howatson, who said: “It was a pleasure to show her around this dynamic and popular community space, which has been many years in the planning. The Sports Village reflects our wider commitment to providing state-of-the-art sporting facilities under the umbrella of Live Life Aberdeenshire, and in partnership with the community.

“I am pleased to say that she was very complimentary of how well the facility has already integrated into the community and she was particularly happy to see services being offered which promote active older age. One of our Council Priorities is to ensure people have the chance to be active, for their mental and physical health. The range of opportunities that the Sports Village delivers and the range of groups that the team are already working with is testament to that.”

CEO of North Banchory Company, David Smart, said: “Since opening, the Banchory Sports Village has become firmly embedded in the local community with a wide variety of groups using the facility.

“As a company we are extremely proud to have played a part in bringing this long-awaited project to fruition. We have spent over £1.5million in developing this project with the Council and the site, which is development land worth circa £800,000, has been leased for no charge.

“By working together we have ensured that the communities of Banchory and beyond now have a modern sporting facility to be proud of.”

Since opening in August, between 70 and 80 thousand people have been through the doors of the sporting facilities now on offer in Banchory, with around 25 active user groups.

Working together all year round.