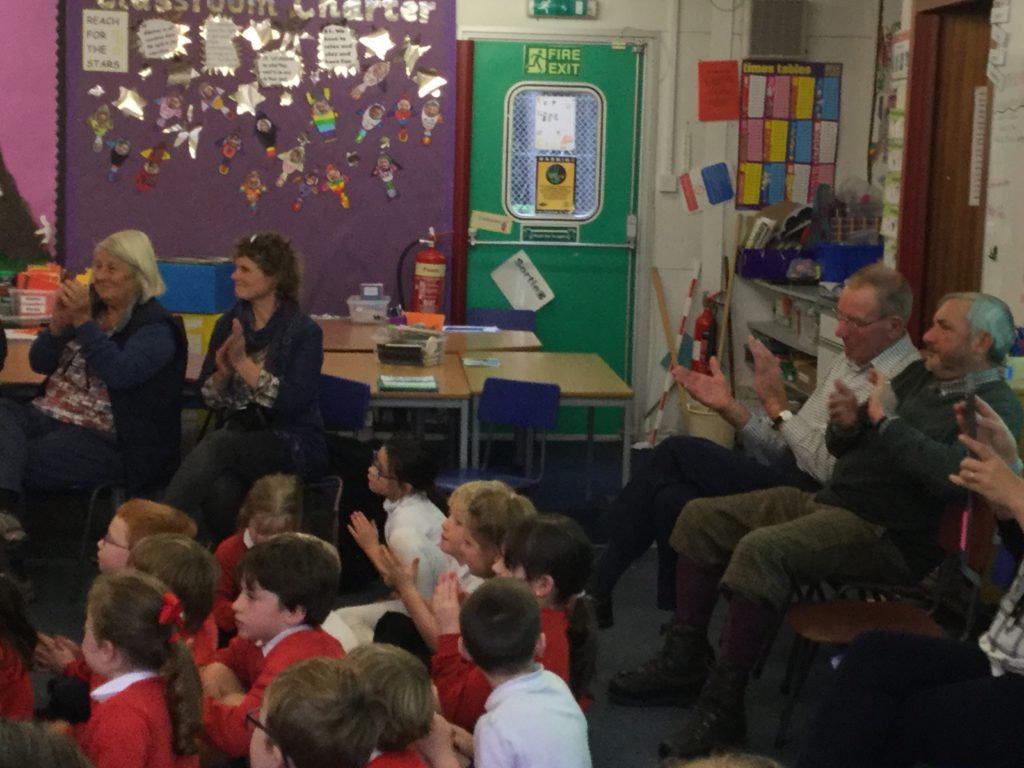 Pupils at Crathes Primary School have been involved in a project called “The Hills An In Atween” looking at the River Dee, the Dee valley and the land use along the river.

As part of the project, Ken Smith, Grieve from Leys Estate, and Estate Ghillie, Brian Sim, were brave enough to volunteer to be interviewed by the Primary 5 – 7 pupils.

The classes had lots of questions about the changes in machinery over the years – from scythe to tractor to butterfly combine – and the pupils were very interested to hear about the different types of fishing rods which have been used over the years.

Leys Estate grieve, Ken, explained the different ways in which the estate is working more environmentally friendly, from the fuel it uses and changes in machinery in general. He also explained to pupils the reason for leaving vegetation gaps between waterways and fields in order to stop any pollutants from the fields entering the streams and rivers.

Ghillie Brian, explained his day to day work and the role he plays in maintaining and safeguarding fish levels in the River Dee. The pupils were surprised by the fact that all the fish caught are released back into the water to safeguard current numbers.

They also heard about trees that are being planted along the banks of the River Dee to provide shade for the fish and keep the water cooler. Brian also spoke about the estate’s work to repair paths and steps along the banks of the river, keeping access open for those fishing in the river and clearing any pollution – such as plastics – from the river.

Both Ken and Brian were a great success with the children who thoroughly enjoyed hearing about their work on Leys Estate.

Also visiting the school as part of the project were Jill Birch (Forest Schools) who took them on a mini-beast hunt in the woods surrounding the school and in the Hatton Burn, telling them about the different ‘jobs’ the minibeasts have and how they all rely on each other. Helen Rowe (Marr Ranger) explored and compared the vegetation in the school woods and playing field. Sheena Blackhall told stories of long ago about what life was like for people living along the Dee and Sheila Duthie (Archaeologist) brought along lots of artefacts and told the children lots of facts about the Mesolithic times in Deeside.

Available for businesses of all shapes and sizes