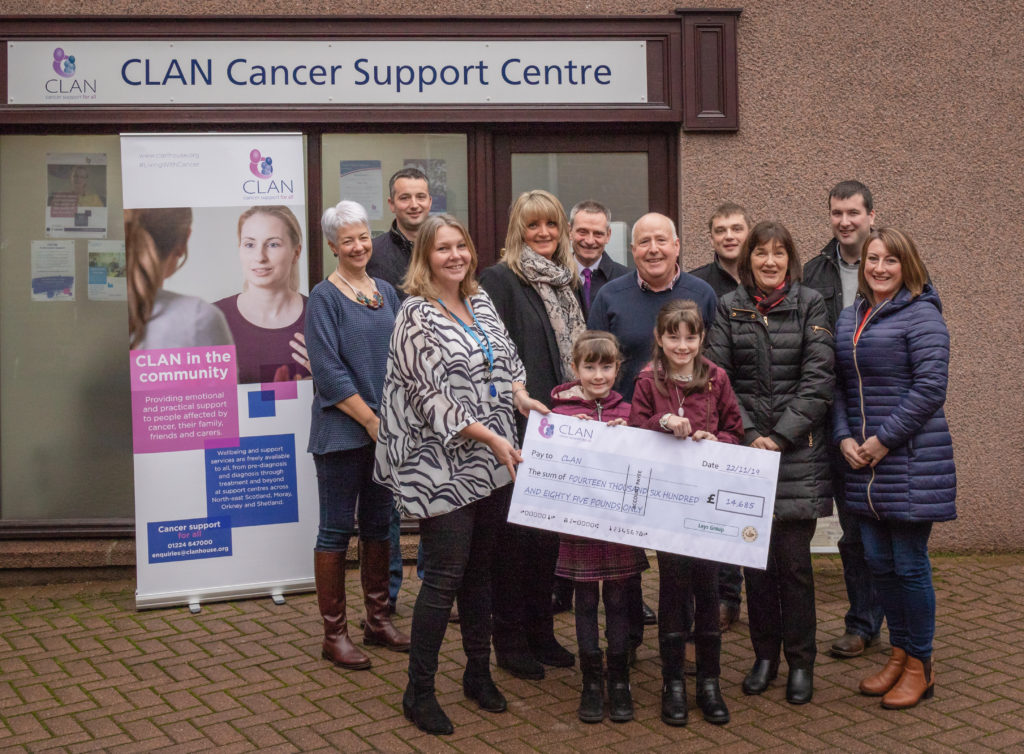 The charity, which supports people affected by a cancer diagnosis throughout north-east Scotland, Moray, Orkney and Shetland, received £14,685 from Banchory-headquartered Leys Group.

The Group, which includes The Bancon Group, Leys Estate and North Banchory Company, organised a fundraising hill walk in the autumn in memory of colleague Irene Steel, who was supported by CLAN following her cancer diagnosis, and sadly passed away earlier this year.

Her fellow Bancon staff, friends and members of Irene’s family joined together to tackle two Munros in one day – Driesh and Mayar – raising money in her memory.

Irene’s family, including her two granddaughters’, Kara ,9, and Isla ,7, handed over the donation to CLAN’s Deeside Coordinator, Helen Hasnip, at the charity’s Banchory wellbeing and support centre.

John Irvine, CEO of Bancon Group, said: “Irene was a very well-respected colleague and friend to many. As a group we decided that we would like to get together raise funds in her memory and her family suggested that CLAN should benefit given the support they had provided.

“The support CLAN gave Irene and her family was so important to her and we are delighted that we have been able to give something back and support the continued growth of the organisation’s vital services in the Deeside area.”

Ann-Marie Steel said: “On behalf of the Steel family, I would like to say a huge thank you to Irene’s friends and colleagues at Bancon for their tremendous achievement in her memory.  I know Irene would be so proud of them and overwhelmed by the amount raised for CLAN, Banchory. A big thank you to all who donated, it really means a lot”

Helen Hasnip, CLAN’s Deeside Area Coordinator, said: “We are incredibly humbled by the efforts of The Leys Group raising funds for CLAN in memory of Irene Steel. Last year CLAN supported over 2,500 people across the region and provided 694 sessions for people affected by cancer in Banchory.

“One in two people will be diagnosed with cancer in their lifetime and people are living longer with cancer, which means CLAN’s support is more vital than ever. Thanks to the support of Leys Group and others, we can continue to help the community in Banchory who are affected by a cancer diagnosis.”

To find out more about CLAN's work click here.

At the heart of Leys Estate

We are proud to play our part in the development of Crathes, Banchory and surrounding communities.