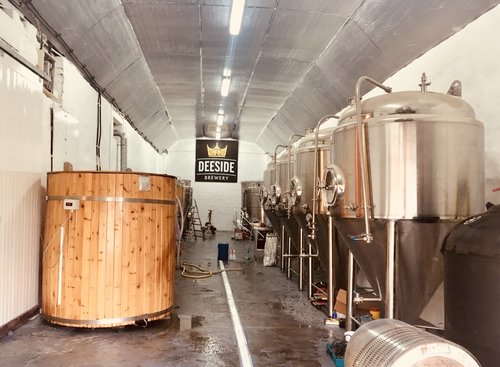 Deeside Distillery has donated 4,000 sanitiser packs to a variety of local organisations, including Banchory Primary School, International School Aberdeen, Woodlands Nursery in Banchory, and food banks in Banchory and Aberdeen.

The company took action after learning that supermarkets were running low on hand sanitiser amid growing concerns among the public and reports of panic buying.

It has now produced its own gel from the spirit – which it described as “the world’s strongest gin” – by mixing it with a vegetable glycerine and aloe vera.

With home-made products unable to provide the high level of ethanol, this alternative blend is providing a lifeline for the community.

Liam Pennycook, the firm’s head distiller, is aware of the problems local schools face in sourcing or affording hand sanitiser during a time of heightened national rationing.

He said: “We had left over spirit which we have increased to 87% abv and by using natural products, we created our own hand sanitiser.

“The actual spirit can be classed as the ‘world’s strongest gin’ which we believe was previously recorded at 82.5%.

“However, we are delighted to be helping our own community with a much-needed solution and we hope it will provide some peace of mind during this time.”

Dave Simmers, chief executive at Community Food Initiatives North East (Cfine), said: “The vulnerable community groups we support will get a huge amount of reassurance by us giving them the hand gel.

“We can’t thank Deeside Distillery enough for the 1,000 units they are providing as well as investing their own time and resources to ensure the local area has access to sanitiser which is severely lacking for the vulnerable groups of people.”

At the heart of Leys Estate

We are proud to play our part in the development of Crathes, Banchory and surrounding communities.