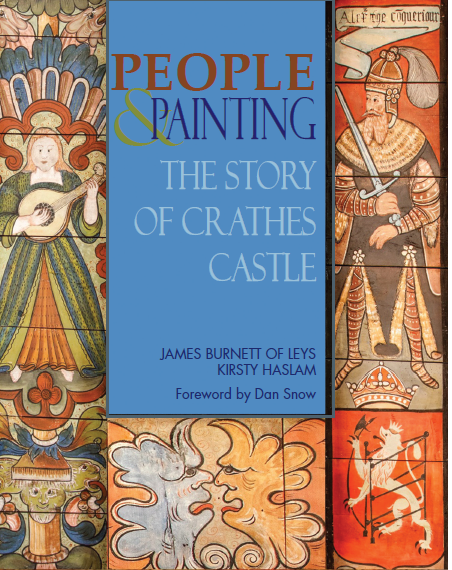 A book examining both the history of Crathes Castle and the painted ceilings which bring the castle’s history to life has been launched in the north-east.

‘People and Painting – The Story of Crathes Castle’ has been written by James Burnett of Leys and Kirsty Haslam with a foreword by Dan Snow, and uncovers the people who have shaped the historic castle through analysing its painted ceilings, which are recognised as some of the finest surviving in Scotland.

The book also documents the history of the Burnett family, who lived in the castle for over 350 years, since its arrival in Deeside almost 700 years ago. The castle, initially a tower house, was thought to have been initially developed by Alexander Burnett, the 9th Laird of Leys, in the 16th century with it evolving through the centuries to the magnificent castle managed by the National Trust for Scotland today.

Having lived in the castle both as a child visiting his grandparents and as his home until 1966, James Burnett of Leys is passionate about sharing the story of the castle’s historic ceilings with visitors to the north-east and historians throughout the world.

Kirsty has worked as a castle guide at Crathes Castle since 2010. She has also worked for the National Trust in England and is currently at the University of Aberdeen.

Balancing both family and local history with the changing face of Crathes Castle, the book takes you on a tour of the castle rooms, giving an understanding of the history of each area of the castle with photographs and illustrations of the artwork and inscriptions throughout. It also documents the influence the family on the castle and surrounding estate including the development of the castle’s own celebrated walled gardens.

James Burnett of Leys explains: “In the 16th Century, Alexander Burnett of Leys carried out as extensive a programme of painted decoration as to be found anywhere in the country. Consequently, the painted ceilings at Crathes are amongst the most important in Scotland. This is not only because of their decorative appearance, but because they tell us so much more.

“For anyone planning to visit Crathes Castle, this book should add much to the experience of their visit.”

‘People & Paintings – The Story of Crathes Castle’ is available to purchase at Crathes Castle, Milton Art Gallery, Yaedons Bookshop, Raemoir Garden Centre and the Banchory Museum. It can also be purchased online via www.burnett.uk.com. Priced at £9.99.

James Burnett of Leys is Chief of the Name of Burnett. A landowner and businessman with a strong interest in maintaining traditional values and community involvement, he spends his time in Scotland and abroad, promoting Crathes to Burnetts worldwide and whose links he greatly values. He has devoted a considerable amount of time and finance to the task of recording and preserving his ancestry and the accumulated archives of the Burnett family and the Leys Estate.

Kirsty Haslam has worked as a Castle Guide at Crathes Castle on-and-off since 2010. She has also worked for the National Trust in England and is currently at the University of Aberdeen researching for a PhD looking at the impact of warfare in late medieval and early modern Aberdeen and Aberdeenshire.